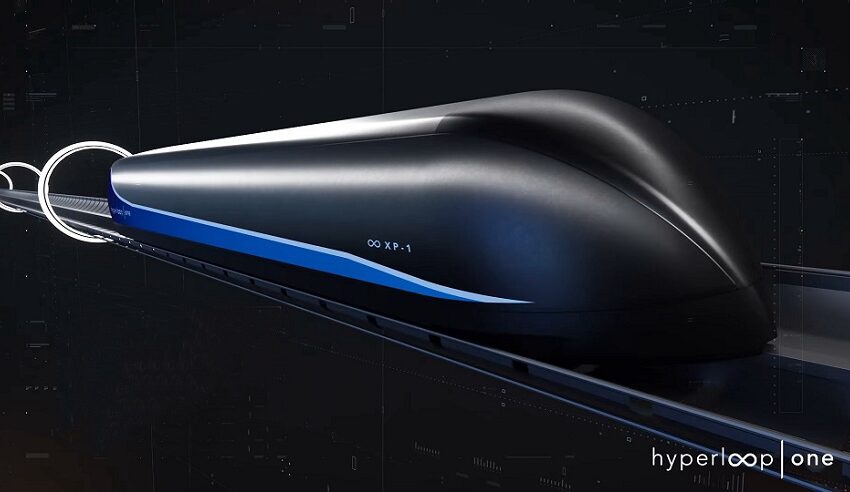 November 8th, Sunday, was when two passengers made their first ride in a hyperloop pod at Test Site in Nevada. That ride was conducted by an American transportation technology company, “Virgin Hyperloop.” Josh and Sara Luchian (both company employees) were the hyperloop passengers who had made this journey for almost 15 seconds in this latest transportation form. The test track was about 500 meters in length and 3.3 meters in diameter. The hyperloop quickly shoots a distance of about 1,300 feet. However, it didn’t reach the company’s conceptual super 760 mph speed but hit the top speed of 671mph.

Hyperloop is the 5th generation traveling system that travels at very high speed. Kilo Design and Bjarke Ingels Group have designed the virgin hyperloop able to carry two passengers. Its designing features include luxury seats, a white floor, a white ceiling, and windows on both sides. From outside, the hyperloop tube was looking like a big white pipe. Its six square-meter space interior was very quirky with a very low-pressure environment.  Because of the low pressure, there is shorter air resistance, which allows high speed in the extreme. Most of the air was removed from it and can fill back up with air.

According to the company, they have completed almost 400 tests on this track. But they involve human passengers for the very first time for a test run. Undoubtedly, it is a significant achievement for Virgin hyperloop. They made history by taking this step and beat their opponents trying to implement the high-speed travel idea. Now the company wants to represent a vacuum train capable of carrying 28 passengers. Moreover, the berth was not sufficient to stand for the hyperloop passengers, so that the future version will allow more standing and walking space.

What exactly is Hyperloop?

The hyperloop system, which is expected to provide direct and on-demand transportation, is made up of vehicles called “pods” that move in a near-vacuum tube at speeds of up to 670 mph (1080 km/h). The unique experience that arises from this new means of transportation is one that prioritizes safety, comfort, and convenience.

One of the ways Virgin Hyperloop can attain such high speeds is by using magnetic levitation in conjunction with near-vacuum tunnels. As one might assume, multiple teams are working together to assure the project’s success, from creating individual components to handling the control systems that levitate and steer the pods as they go down the tube.

“It was like flooring the pedal on a sports car, although I haven’t had that experience before, but nothing uncomfortable,” Sara Luchian said in an interview. She is the director of the passenger experience for Virgin Hyperloop. Luchian was eager to experience the acceleration and the ventilation system. According to him, it was exhilarating both psychologically and physically. Conclude from all of her statements that the ride was not uncomfortable at all.

We are not astronauts, we are just there sitting in it. And after the trial, Giegel says that their focus is to build faster and cheaper than you can build high-speed rail and to automate as much as we can.” He is one of the hyperloop passengers, the Co-Founder, and the Chief Technology Officer at Virgin Hyperloop.

There is less air resistance on the pod since the tube is such a low-pressure environment. “That allows you to go at the speed of an airplane while using very little energy,” Giegel explains. The pressurized pod resembles a wingless airplane, and the tube it’s in replicates a very high-altitude environment. The mechanism is entirely electric, with “magnetic forces” allowing the pod to both float (it’s not traveling on wheels) and gain velocity, according to Giegel.

Chairman of Virgin Hyperloop, Sultan Ahmed Bin Sulayem, said that he always had tremendous belief in the team to transform this technology into a safe system, and we have done that. He adds that we are one more step closer to a new era of ultra-fast and sustainable movement of people.

Consider a scenario in which cities are linked as readily as metro stations. A world in which you can go from Las Vegas to Los Angeles in the time it takes you to drive across town. A future in which you may drive at speeds of up to 670 miles per hour without polluting the air or damaging the environment.

We got the opportunity to speak with Trevor Hanken, a member of Virgin Hyperloop’s test automation team, and Alex Wolpe, who oversees the test software group. We discussed Virgin Hyperloop’s experience thus far, how NI enables the team to achieve their goals, how collaboration opportunities afforded by NI are driving innovation, and what the future of transportation will look like.

Virgin Hyperloop One is on a goal to provide quick, easy travels that open up new possibilities. How do they intend to do this? The Virgin Hyperloop team is redefining the way we think about mobility and delivering practical, sustainable alternatives to existing transportation with the advent of hyperloop.

Professionals working in major metropolitan areas are currently confronted with issues ranging from high traffic during lengthy commutes to more time spent away from loved ones since they reside outside the city. These problems not only have a severe impact on these people and their families, but they also represent bigger environmental concerns in the form of traffic congestion and energy usage.

Transportation that functions at unprecedented speeds is thrilling for everyone, whether you’re sick of commuting or simply enjoy traveling and discovering. The implementation of hyperloop would also offer new avenues for accessibility by generating new economies and providing chances for individuals to live and work in regions that would otherwise be inaccessible. The advantages of this transformative breakthrough in the transportation business are numerous.

We are thrilled to be a part of Virgin Hyperloop’s journey to usher in the future of transportation, from hardware and software to collaborations and ongoing support.

So, what is the next step for the Virgin Hyperloop team? Following the success of the team’s first-ever hyperloop test in November 2020, in which passengers traveled 100 mph in only 6 seconds, they intend to continue leveraging NI’s evolving test technology and test solutions to support their plans for reinventing mass transportation and executing their audacious vision. Keep up with the Virgin Hyperloop crew to see innovation and performance at its best.

Moreover, Virgin Hyperloop announced a partnership with BIAL (Bangalore International Airport Limited) to direct and manage a feasibility study for an advanced hyperloop corridor from Bangalore. Last year, it also signed a contract with Punjab’s transport department. Furthermore, Virgin Hyperloop currently focuses on building a bigger, six-mile-long test track in West Virginia and plans to propose a commercial hyperloop in 2021. Other companies are also working on hyperloop technology including Hyperloop Transportation Technologies, based in Los Angeles, Dubai, and Hardt, for more inventions.